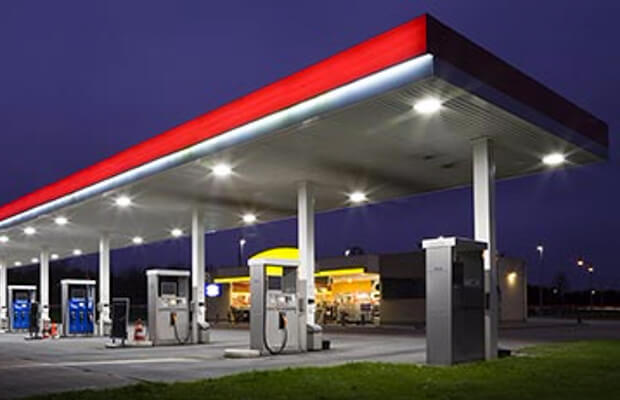 John Baker, owner of Harbor Petroleum, is a hands-on kind of guy when it comes to running his eight Connecticut-based gas station franchises. He cares about making sure that his customers feel safe when they stop in to fill their tanks, especially late at night. In fact, you might even see him get on top of the canopy from time-to-time just to make sure a lamp was installed correctly. But when he noticed that his competitors were switching from the old metal halide lamps to LED lighting, he felt inspired to investigate the energy efficiency of the lighting in his own gas station.

Up until now, the canopies of all eight of his gas stations have been outfitted with metal halide lamps—a state-of-the-art technology back in the 1980s when they were first installed. But compared to some of the newer lighting available now, these antiquated lights have become more of a safety, energy and maintenance issue than cutting edge technology. “They’re like sun lamps,” says John, “at 320 to 400 watts per lamp, they give off a lot of heat.”

That’s a lot of wasted energy coming from a lamp that could take up to 15 minutes just to reach 90 percent of its full lighting capacity. Breaker blow-outs and peak usage charges were another issue frequently experienced with the metal halide lamps. Because they have such a high initial energy load, turning them on all at once could overload the gas station’s circuitry. To avoid this, gas station managers had to spend extra time to turn on lights one-by-one as they warmed up.

A Solution Comes to Light

Even with the metal halide lamps humming along at full capacity, the gas stations looked dated and customers were reluctant to stop in late at night. “As they age, metal halide lamps become [dimmer] and eventually start to flicker and go out,” explains John, “even when we install new bulbs in the canopy, the difference in age makes it look like a hodge-podge of lighting.”

A few years earlier and with the help of a local tax incentive program, John retrofitted the interior lighting in the convenience stores of his gas station franchises. Not only were new LED light fixtures installed in the stores themselves, but also inside the coolers where warmer fluorescent lighting made it harder to keep the space at a constant temperature. This helped cut down on energy costs and created a more pleasant environment for both customers and employees.

This time around, he was able to take advantage of a state-based tax rebate program that provides incentives to business owners like John for implementing energy-saving technologies. He initially hired a local contractor to perform a lighting audit and retrofit the old metal halide and incandescent lighting with new LED fixtures, but found that the workmanship wasn’t up to his standards.

A Light at the End of the Tunnel

John started with an inner city gas station located in Waterbury, CT, one that was in dire need of a lighting retrofit. A lighting consultant met with John to discuss his goals and conduct an energy assessment. They found that a lighting retrofit would help him accomplish three goals:

Increased Curb Appeal—Unlike metal halide lamps, LEDs don't change color as they age and they also provide a cleaner look than even brand new halide bulbs. Plus, in an area where several gas stations are located, customers tend to gravitate towards those with better lighting late at night because of a greater perceived sense of safety. Retrofitting the canopy with LED lighting would allow John to compete with neighboring gas stations and retain his customer base.

Less Maintenance—Not only were the metal halide lamps energy inefficient, they incurred a number of ancillary costs in terms of maintenance.

For instance, when a bulb needed to be replaced, a store manager would have to notify John who would then have to procure the product. Then, an electrician would have to come to the site with a bucket truck in order to reach the 18-foot canopy. Since the electrician charges per visit were steep, John would often wait until multiple lamps needed to be replaced before placing a call. In the meantime, the lighting continued to deteriorate as the halide bulbs dimmed and went out.

Even the best metal halide lamps have a lifespan of about 20,000 hours per bulb, while LEDs offer an average of 50,000 hours per fixture. In addition to dramatically cutting down on the frequency of maintenance, a blown LED diode would be far less noticeable than a metal halide bulb.

Energy Savings—Did you know that lighting makes up over 30 percent of the energy bill in most gas stations? According to an article in Forbes, a complete LED lighting retrofit in a gas station canopy could cut energy usage by up to 55 percent.

After conducting an energy assessment, John discovered that a lighting retrofit would net him an annual energy savings of $17,600 and an estimated kWh reduction of 110,390 kWh per year. He estimates a return on investment in six to nine months from the date of completion.

The following week, a lighting contractor and project manager arrived on-site to begin installation. They planned to install a combination of lighting ballasts and lamps in outdoor parking lot poles, wall packs, and canopy fixtures. There was just one problem—the East Coast was experiencing one of the coldest and unpredictable winters in history. In addition, John was still feeling cautious from his previous experience and wanted to make sure that the workmanship met his high standards.

“I liked that there were no surprises,” says John regarding the way their approved contractor communicated with him, “I always knew what to expect.” Whether due to a snowstorm or a delayed part, my contractor always communicated his availability and provided a timeframe for the project.

As the retrofit progressed, John got up on the canopy to personally inspect the work. “The contractor was able to get the work done without having to learn on the job,” states John. “You could tell he had done this before.” That’s when he decided which contractor he would award the contract to retrofit three additional properties.

John’s experience underscores the importance of working with a qualified contractor when it comes to a major lighting retrofit for your business. Take it from John, “the best fixtures in the world don’t mean anything if they aren’t installed properly.”